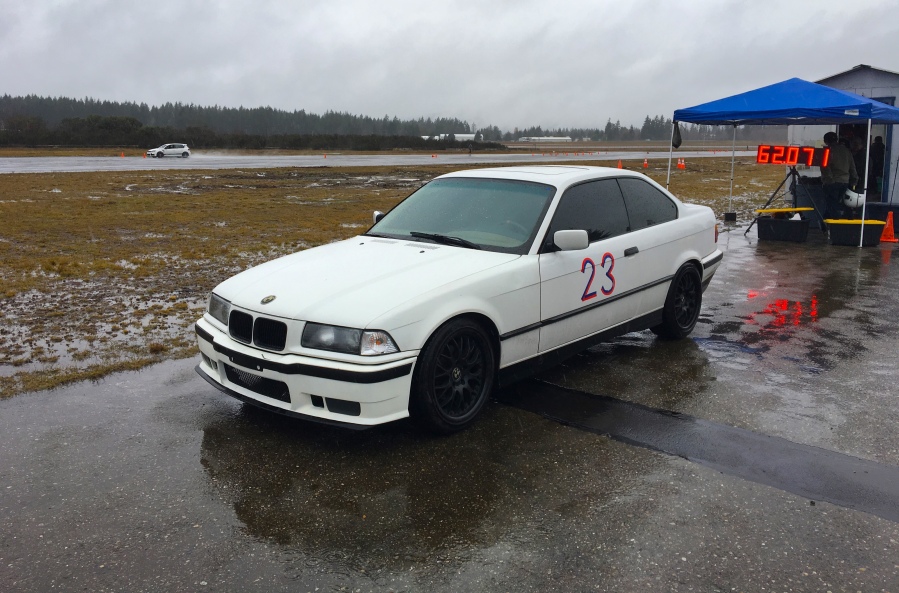 The first event of the season is here for my local autocross club! This event is a practice where time is kept but no points are dished out. The anticipation leading up to the event was pretty large for me but grew even larger as the weather report for the day started to become certain. Rain! Lots and lots of rain! It rained for the two days leading up to the autocross and the entire day of racing. Temperatures never got above 45* F. This probably wasn’t going to produce very good times for me in my first ever autocross but it should be entertaining!

A morning check of the radar right before leaving showed that the rain would probably be sticking around the entire day. The red star in the picture above is the location of the track. The rain was very steady as I pulled out of the driveway in the E36.

Once I got to the the track it was time to figure out how this whole thing really worked. I’d read everything available on the local sports car club website, and even preregistered for the event, but still that will only tell you so much. Turns out my local club has everything planned out really well. I finished registration for the event, obtained my time card, got assigned a work station, signed a liability form and then drove over to tech inspection.

The car passed tech inspection without issue. Seems like they’re really just looking for blatant safety concerns and loose things in the car that could become flying debris or get stuffed behind pedals.

Once the car was parked in the pre-stage area, it was time to go out and walk the course. I joined a veteran instructor on a very informative course walk. He let me know what cone configurations signaled a gate, mandatory slalom, optional slalom (pick which direction to go around first), and other unique course features. I was able to walk the course twice but I knew that I definitely hadn’t memorized it. Unfortunately, a course map wasn’t available for this first event (they’re usually available for each event) so I had to just go on what I could remember.

What I could remember is that the course had a lot of different surface types. You can see that pretty clearly in the picture above. There’s new slick asphalt, really old rough asphalt, and everything in between. The one thing that the surface types all had in common was being extremely slick with standing water in numerous locations. This was going to be pretty interesting! 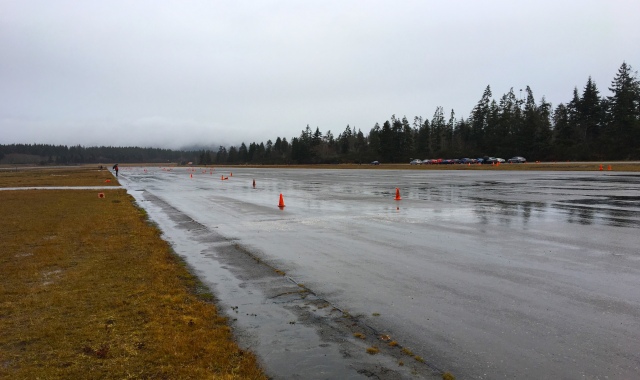 Instead of racing first, I was assigned to be a “cone steward” for the first session. My assignment, Station 5 (as seen above), consisted of a gate, a slalom and then a long sweeping corner. Whenever a cone was moved or knocked over, I had to run out and place it back into position. I’m definitely glad I wore my rain/cold weather gear as I stood on the side of the track for an hour in the pouring rain. Soon though, the first session was over and it was time for me to jump in the BMW and make some runs!

I pulled into line behind a yellow 2003 Mustang SVT Cobra and waited for my turn. The rain had maybe slowed a little but the track was no less damp. However, it had been nearly 2 hours since my last course walk and I’d only been staring at a small section of the track during my work assignment. I couldn’t remember much of the track features or order of the cone setup, this wasn’t probably going to go well on the first run!

What a blast! Autocrossing is definitely a great time and it was well worth the initial investment in the car (and my time). It’s very clear that there’s a high level of skill and practice that will be necessary to do well at this!

Here are some other fastest times of the day for select cars that were at the event (that weren’t marked “Novices”):

And here are the other STX class cars (notice a pattern?):

I feel like my BMW 325is performed very well for the first time out and in terrible conditions. First, nothing broke or was an issue during the event. This is great as I was a little concerned that this first race weekend might uncover some previously unknown problems that would need addressing before the second event.

Here are my observations from the event on both my driving technique and the E36:

So basically, the car is complete, and now I just need to work on me! Coming up in a few weeks is a novice instructional event at the track. During the event you can have a veteran instructor ride with you and even drive your car in order to offer coaching. I plan on taking advantage of this event as I need all the help that I can get! I plan on recording the sessions in the car with the instructor (after obtaining their permission) in order to help others as well.

So, in summary, this first autocross event was super fun and I have a lot to learn! Stay tuned for future posts on more events as the season really kicks into gear.