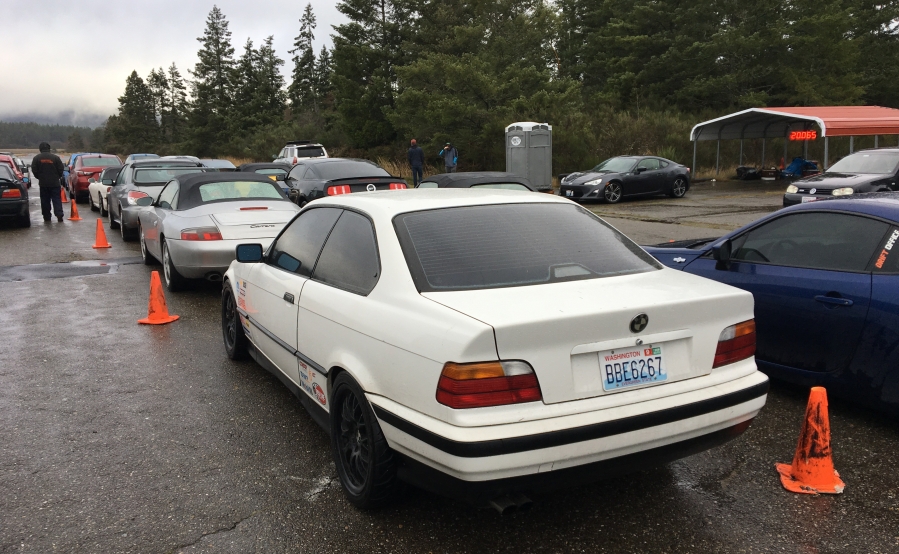 The first chance to get my BMW E36 on track in 2018 has arrived! It’s time to see how all the weight reductions, steering component changes and general winter repairs/upgrades will affect my runs. As usual, the first practice of the season will be held in the rain. That’s just what Seattle in February provides…

We’re not just talking about rain, we’re talking about 30 mph sustained winds, gusts of 50+ mph, and cones blowing all over the track! My two course walks had me trying to figure out where to place the cones that came blowing past me. The track team ended up placing two cones on top of one another for the added weight. It seemed to work well but made for some funny situations when a car took out several stacked cones and the station workers couldn’t figure out where they all went! The standing water everywhere was just a bonus.

There were a lot of great cars that turned out for this first practice. Here are some notable ones:

I was really glad to see the 1999 BMW M3 came out. We were going to show the rest of the field what the E36 platform is capable of. This particular M3 was upgraded with the same Ground Control suspension system that I’m using. The owner said that he saw how well it performed in my car and decided to do the same thing. Great to see!

The track was definitely slick from the rain but we also learned that a local fire truck had been out on the track yesterday, doing some drills, and blew an engine seal while driving around. It left an oil slick on certain sections of the track. Bonus conditions!

I planned to take it easy on the first run but, as usual, I pushed it too hard:

I was the first car to spin in that specific corner, but definitely not the last. I think the station workers decided to move back a bit farther for future runs!

Here’s a full length video of my best run. Sorry for the strange autofocus effect. I was trying out a new camera position and it didn’t work out so well. I apparently also forgot to turn the windshield wiper on so that doesn’t look so great. Whatever. Just listen to the sound though!

All things considered, I was very happy with the performance from my E36 on the day. The tires worked pretty well in the rain (way better than the old ones) and the car definitely felt more planted in the corners with the reduced weight.

Steering feel was also great and not too heavy with the manual rack. This was probably my biggest worry going into the day and I didn’t even think about it when actually making my runs.

I ended up in the top 5 or so overall for run times in my session. My best was 65.0 seconds while my other runs were still in the mid/upper 65 second range (except the spin run). There were a lot of pretty expensive cars that couldn’t keep up on this day.

It was really satisfying to see the fastest time of the session set by our club President (and regular champion) in the 1999 BMW M3. He was just guest driving the car for the session but managed to make a run in 63.0 seconds! His vast experience and excellent driving definitely demonstrated the potential of the E36 chassis. I think it was very eye opening for a number of guys in new(er) cars.

It was an awesome day and I’m looking forward to the first event!