The Rocky Mountain SCCA Solo summer series is finally getting underway after a very long break (for me at least). It was time to get my E36 out on the track and see if all these performance improvements were really going to make a difference! I’ve thrown a lot of things at the car over the winter (supercharger, LSD ratio, sway bar, lighter wheels, etc) so I was guessing that this first event was really going to be about understanding how different the car is now from the last time that I’ve raced it. I knew this may be a bit of a learning experience! 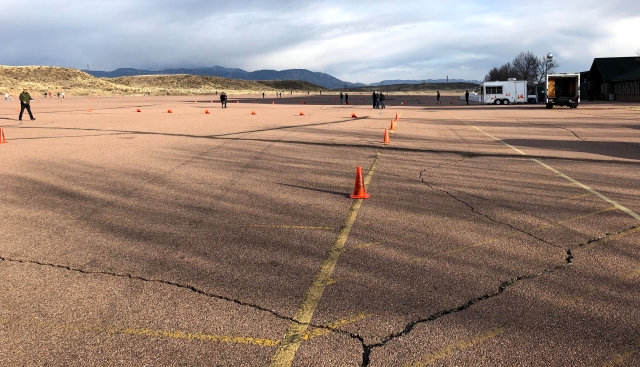 The first event was held at Pikes Peak International Raceway (PPIR) just to the South of Colorado Springs. The autocross course was setup in the giant parking lot adjacent to the actual circle track. The weather was great (high of 65* F) and the surface was dry. 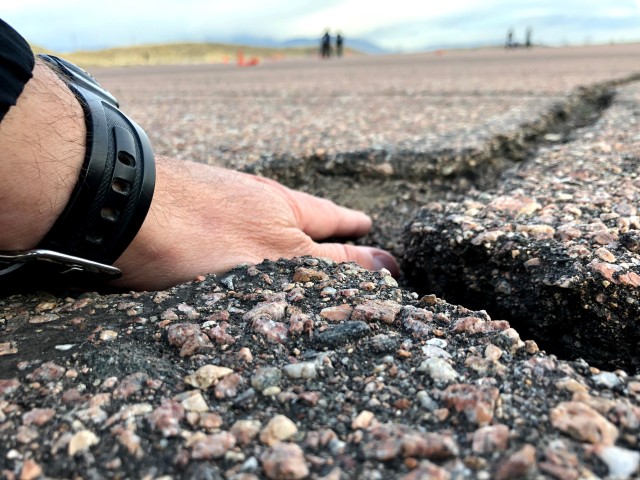 However, there were fizzures in the surface all over the place. It honestly looked like an earthquake had torn the parking lot into several sections. In the picture above you can see how some were so large that my entire hand would fit inside. I was a bit concerned that if I ran over some of the larger crevaces then it might bend a wheel or take off my front lower valence. It was also going to be pretty rough on my tires…

After walking the course about 6 times, I thought that I’d probably have to shift 3 – 4 times through a run since I now had a shorter rear end ratio (3.91). 2nd gear tops out at about 47 mph now (used to be 60 mph with 3.15 gears). That could potentially trip me up as I’m not super experienced with my new AKG Motorsport shifter yet. 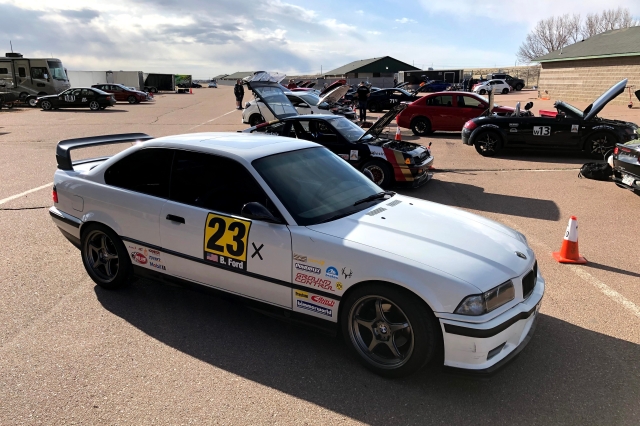 I decided just to run in the “X” class for now as I still try to decipher my local classing rules. I’m not in it for the trophies, I just want to go fast! The beast was ready to go, so let’s see what happened:

This was a pretty good run and you can see that I was fairly excited to get a 45.438 second time. My very first run (which I forgot to film) was a mid 47 second as I got slightly confused on one section of the course. Let’s see if I could improve my time with my next run!

An improvement! My final run came in at 45.166 seconds which I was a bit dissapointed by as I knew I should be able to get into the low 44’s if I could put it all together. My E36 is definitely faster than I am now and I need to focus on my driving to put together good runs. It has more to give but I really need to concentrate on proper technique, being smooth, and focusing on the transitions.

After the results were posted, I found the following competitor cars and times pretty interesting.

The only street legal cars (not on racing slicks) that posted better times than my BMW E36 were:

Others cars of interest that came in slower than my time:

So, all in all, this was a great first event and it proved to me that my E36 is such a well balanced car that I now need to focus on just driving better. I know the car easily had another second or two to give but I just couldn’t execute in this event! Focus, focus, focus… smooth is fast.